You what? You’re going WHERE for a holiday? Colombia?

You must be absolutely mad!

What on earth is possessing you to go there?

This was the general reaction when I mentioned where we were heading for our holidays this year. But the detractors and smart-Alecs couldn’t have been more wrong.

Crime, well we certainly saw none, nil drugs, yes, some abject poverty, but hey, there are around a dozen people currently sleeping in doorways on Manchester’s Deansgate; no litter anywhere, with tripartite bins for paper, glass/tins and non-recyclables on most street corners, superb speedy and cheap public transport with no peak fares for a substandard service, no road potholes, fabulous hotels . . . .  yes, Colombia is nothing but fantastic! Well, providing you exclude car drivers. They are like the drivers in Rome or Paris - suicidal!

We kicked off in Medellin, former home to drug lord Pablo Escobar, one-time richest man on the planet. However, it is now possibly more famous for Fernando Botero, the incredibly prolific “fat” artist. There are still signs of Escobar’s association with the city, but they are doing their level best to erase this somewhat murky blot on the past, although because of what he did for the poor, it has not been an easy task. 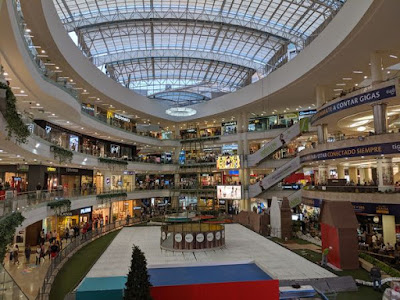 Because it sits in the Andes at around 4,905 feet (1,495 meters) and is extremely temperate, it is called the City of the Eternal Spring. It is so strange to visit a city where you won’t find central heating or even a solitary heater in any building or on sale in any shop. And what a pride the locals take in their city. Yes, there may be graffiti all over the show, but you won’t see even a cigarette butt on the ground, let alone the McDonalds coffee cups you see strewn all over the paths of say Salford.

Yes, you’ll see unfortunate Venezuelans on every street corner trying their hardest to sell you all manner of goods and chattels you don’t need in an honest effort to support themselves, having been forced from their home by the political situation in Venezuela. But everyone has a smile on their face. Everyone is proud of what they are. And they don’t have the equivalent of our rather expensive Brexit sucking their economy dry. In fact all Colombians in the international know think Brexit is a total joke.

Medellin (and Colombia as a whole) has turned around its legacy as the world’s Cocaine capital to become an incredible tourist attraction. It’s just that it doesn’t quite know it yet. The world-infamous District 13, where drugs, murder and mayhem ruled for several decades is now the premier tourist attraction not only for foreign visitors, but for out-of-town Colombians themselves. But there is something rather surreal about being able to access what is in essence an almost ramshackle, huge Favela-style hill town of several hundred thousand people via a series of escalators! 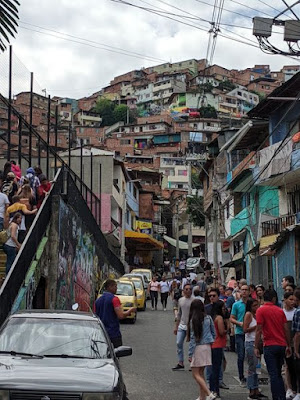 But this is just partially how Medellin (and the reminder of Colombia) has reinvented itself. Perhaps the most expensive commodity in Colombia is electricity. You see minimal if any lighting in most local shops (the large shopping malls are certainly the exception!) throughout the city. The region’s electricity company, owned by the city, generates (no pun intended!) in the region of $1billion profit a year, which unlike many British utilities owned by foreign interests, is ploughed back into Medellin’s infrastructure and transport. This is the reason they have a wonderful metro train that costs pence to travel on, public attractions that are free or as near as makes no difference to free to visit, a continual ongoing road improvement initiative with flyovers and flyunders attempting to ease road congestion with almost a complete one-way system throughout the entire city, fuel at around 23p a litre and a spectacularly low cost of living. And a four-bedroom, four-bathroom, three-reception house in gated grounds will set you back around £110,000.

However, we were spoilt – we had the services of a private driver for the entire week in Medellin, so we had a very full and well-planned itinerary (recommended).
And so on to Cartagena on the “Caribbean” coast. The famous walled city with its castle has seen many a blockbuster filmed there, including “Romancing the Stone” (Michael Douglas and Kathleen Turner), and more recently Netflix’s “Narcos” and Will Smith’s latest film “Gemini Man”. The old city has a tourist peninsula just over a mile ‘up the road’ from the old town with some of the usual suspects such as the Intercontinental and Hilton. And across the bay near the cruise terminal is the business district with matching hotels that are less of a tourist attraction and more for those with corporate charge cards. Unfortunately, what dirties the brush in Cartagena is the constant on-street harrying by people trying to sell you boat and coach trips or trying to usher you in to their restaurants. A trip to the Volcan de Lodo El Totumo (a dormant volcano filled with mud) is quite an experience. However, with the mosquitoes having had my legs for lunch on a visit to a coffee plantation outside Medellin the previous week, I found the mud masseurs relieved the irritation almost immediately! 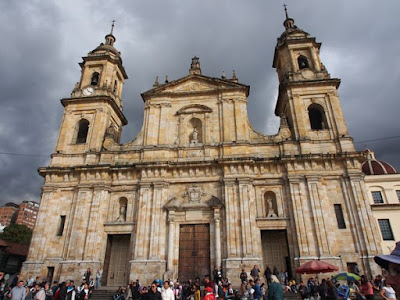 Bogota, the capital is a quite attitudinal 8,660 feet (2,640 meters), meaning that when you land at the airport, your ears don’t pop. It is an enormous city, home to over seven million people. For those with little time for a working capital city, you won’t be impressed, although the ludicrously famous Bolívar Square with its cathedral is the main tourist attraction in the city, beloved by protesters, celebrants and the film industry alike – the cathedral has featured in absolutely hundreds of South American-filmed Spaghetti Westerns and crime dramas over the decades. Worth a visit is the Gold Museum, with its incredible exhibits that are so rare and fabulous that they actually cannot be valued. Personally, I loved the vibe, and my camera never stopped once!

We stayed in the suburban Dan Carlton Hotel, a quite luxurious five star conference hotel. It was somewhat of a surprise to find that five coffees, a beer and a sparkling water left change out of £10! But then that’s prices in Colombia for you!

In summation, I really can do nothing but recommend Columbia.

What is it with solutions? And other meaningless rubbish?